The Erani C horizon includes vessels that carry a variety of decorative styles:

The Erani C horizon includes vessels that carry a variety of decorative styles:


One small, crudely painted miniature jar with false spout is notable for having an Erani C type decoration and also exhibiting a poorly executed example of Basket-Painted Ware. If the rather careless painting represents a degraded and late example of that style, then this vessel hints that the Basket Ware Style of painting may have preceded this Erani C Style.

Chronology: At Tel Erani, vessels with these features first occur in Layer C, which dates prior to the later EB I occupations. Vessels decorated in Basket-Painted Ware also appear in this layer. While the absolute lengths of time during which these styles were produced is not yet known, it appears that both were in use during advanced but not very late EB I horizons.

Vessels with Erani C horizon decoration are found in Egypt, in Abydos Tomb U-j, and at sites in southern Israel, from the northern Negev to the Shephelah. The northernmost occurrence is at Tell en-Nasbeh in the Judean hills. 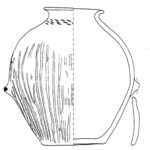 Citation for this page