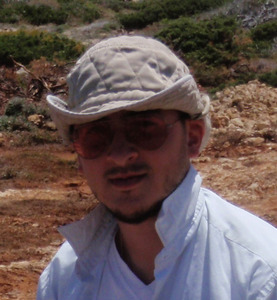 Hazar Kaba was born in Lefkosia, Cyprus in 1985. He did his B.A. in Classical Archaeology at ANKARA UNIVERSITY between the years 2002-2006. He won his M.A. Degree with the thesis "Bird Motif on Cypro-Archaic Pottery" in 2008. His Phd. was on the Classical necropolis of the Soloi in Cyprus titled as "Cypro-Classical Necropolis of Soloi".

He worked as an archaeologist for many years in the excavations conducted in Salamis-Cyprus, Temple of Apollon Smintheus at Gülpınar-Çanakkale and Calcholithic settlement of Gülpınar. He also took part in the excavations at Ancient Idalion-Cyprus. He had done many documenting and archive works in many museum in North Cyprus and Turkey.

Hazar's latest research interest was to identify and study the Cypro-Classical Period of Soloi in Cyprus via the old and recent finds from the cities ancient necropolis.

He studied the daily life, religious believes, cultural interactions, socio-political structure, belief in after life, burial customs and city organization of the ancient Soli and Solians by using the tomb architecture, organization of the necropolis, grave stelai, local and import ceramics, figurines, metal wares, symposion sets, jewellery and other various daily usage utensils found so far from the tombs.

His study will not only concentrate on the Classical Period of the Soli and its habitants but will also enlight the cultural relations between Cyprus, Greece, Macedonia and the Achaemenid World.

There is no petro-fabric information from this contributor.

There is no petrographic samples from this contributor.

There is no kiln/Workshop information from this contributor.